Jurgen Klopp said he would “love” Steven Gerrard to be his successor after ensuring the former Liverpool captain’s return to Anfield as Aston Villa manager ended in a 1-0 defeat on Saturday.

Mohamed Salah’s second half penalty secured a vital three points for the Reds as they remain just one point behind Manchester City at the top of the Premier League.

Klopp’s men should have been more convincing winners as they dominated the vast majority of the game, but were frustrated by a combination of desperate Villa defending and poor finishing.

Liverpool had to withstand a nervy finale as Gerrard believed his side should also have been awarded a penalty when Alisson Becker bundled over Danny Ings.

“The first 75 minutes was incredible football,” said Klopp. “We played in the spaces we wanted to play but we did not finish the situations which is tricky.

“We scored with the penalty then the relief was obviously too big and it was an unnecessary open game. (The last 15 minutes) was like tooth ache! Nobody needs that.”

Gerrard said before the game he would gladly sacrifice some of his legendary status among the Liverpool support for a result on his first trip to Anfield as part of the visiting team.

The man who scored 186 goals in 710 games as a Liverpool player was welcomed with gentle applause as he emerged from the tunnel, but there was no great fanfare for his return until the Kop chanted his name shortly after the full-time whistle.

“You have to understand when you come to the Premier League, you are going to have these days,” said Gerrard. “There is a lot of emotion, but I tried to focus on Aston Villa and make sure that is the priority.”

Gerrard, who joined Villa last month after three-and-a-half years as Rangers manager, has been tipped as Klopp’s successor when the German’s contract expires in 2024.

“The good thing is I have no problem with this sort of thing,” said Klopp on the speculation over his future. “I will not be here forever so I would love it to be Stevie, but no I did not feel under pressure today.”

Gerrard admitted there “was a level between the sides” for the majority of the match as Villa were camped inside their own half.

Andy Roberston had two strong penalty appeals waived away, while Emiliano Martinez saved from the Scotland captain and Salah before the break.

Virgil van Dijk was next to be denied by the Argentine number one after half-time.

Salah bent another effort narrowly over moments later, but he finally made the difference for the only goal of the game on 67 minutes.

Tyrone Mings was roped into a clumsy challenge on the Egyptian and at the third time of asking, Liverpool got their spot-kick.

Martinez has earned a reputation as a penalty specialist, but Salah’s strike was too precise for the Villa stopper despite guessing the right way.

Going behind suddenly sparked Villa into life as Gerrard introduced Danny Ings and Emiliano Buendia to offer more of an attacking threat.

And they too had a big appeal for a penalty turned down late on when Alisson’s attempted clearance rebounded off Matip towards his own goal and the Brazilian goalkeeper escaped unpunished from a collision with Ings.

“For me there were two penalty incidents in the game. They got theirs, we don’t get ours,” said Gerrard.

“You can be too gung ho against these sides too early. The plan was to take it to the latter stages and then get more of our attacking players on the field.

“Hopefully I can be more bold and ambitious against these sides in the future.” 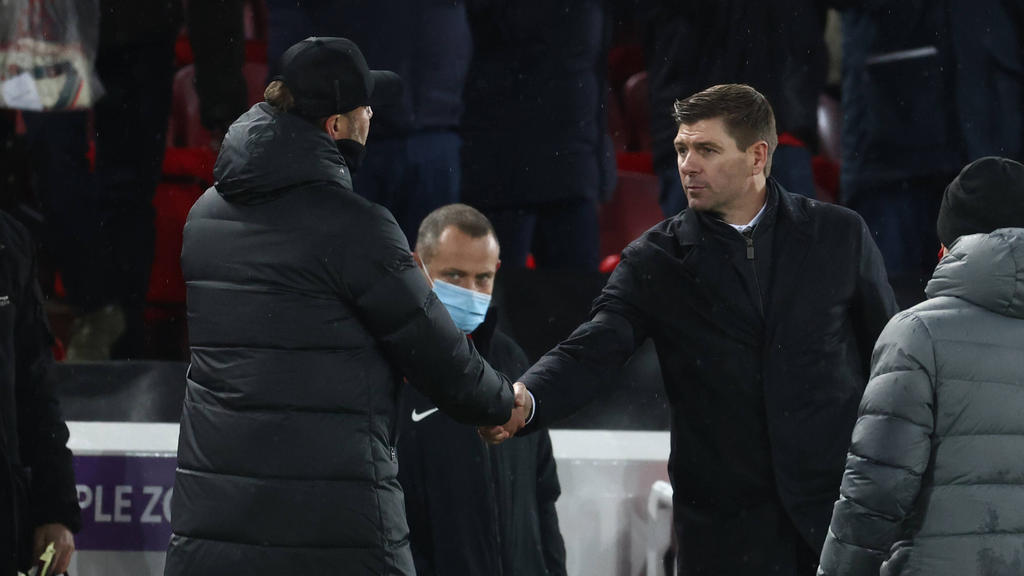